I am a huge fan of really good coffee. But I live 10 miles from a Starbucks, and I’m too frugal to pay Starbucks prices for my daily cups of joe. I had seen Pueblo’s local Solar Roast Coffee guys offer samples of their brewed coffee in SamsClub using a pour-over method, so I knew that a really good cup of coffee didn’t require huge sophisticated equipment. So I decided to knock off one of my New Year’s resolutions: learn to make a really good cup of coffee.

I drink decaf coffee and have been buying relatively good beans for a long time and grinding a week’s supply in a good quality burr grinder. Good decaf beans that are affordable are hard to source, and I wanted a regular supply to appear magically in my mailbox every month. So I set up a Subscribe & Save order with Amazon for 2 lb of San Francisco Bay decaf espresso roast coffee.

But that didn’t yield a really good cup of coffee using my trusty Mr. Coffee 4-cup coffee maker. So I needed to change the way I make coffee in addition to the coffee itself. I needed to brew coffee manually.

I researched different pour-over methods of making coffee, including French Press and Chemex. I already had a French Press from bygone years, and I still couldn’t get a good-tasting, non-gritty cup of coffee from it. Chemex machines were expensive, even the knock-offs. One of the comments in a Chemex review suggested that all I needed was a porcelain dripper and an understanding of the v60 brewing method.

I now have a perfect set-up and am producing 3 cups of rich, mellow coffee every morning without much more work and in about the same time it took the automatic coffee maker. Here are the ingredients:

I am adjusting the method described in the v60 Pourover Brew Guide to suit my preferred coffee strength. The whole process takes only 4 minutes. Here is my method:

I can’t tell you how many times I’ve changed the default colors in the Excel color palette to more subtle, pastel shades. And then I do it again a couple months later. And then again.

Today, when I once again yearned for a way to import pastel colors from a convenient template found somewhere on the Interworld, I realized that no such template exists.

To import this palette into your Excel program (I’m using the old Excel 2003, so you may need to adapt these steps to your application),

Lynda.com is the BEST online tutorial service available. They’ve been around since 1995 and offer outstanding video tutorials on software, creative, and business skills. A couple years ago I gave up my monthly subscription to Lynda.com because although it was worth it, I just didn’t have time to view the tutorials and didn’t want to waste my money. A few months ago I had more free time and was searching around for video tutorials and discovered something amazing…

NOW you can get a FREE Lynda.com subscription via your local library. The Pueblo Library is not very large so I was absolutely amazed that it subscribes to Lynda.com. What a tremendous service! If you have a Pueblo library card, you are automatically eligible to use Lynda.com.

To get started (and probably the easiest way to learn if your library offers this) is to type the following URL into your browser and replace “your librarys URL” with your library’s URL:

I can’t say enough good stuff about Lynda.com. They’ve helped me develop my business skills, learn new software programs, learn Web design (right now I’m learning how to master WordPress). Whenever my business is a little slow, I fill the time watching Lynda.com video courses. They have over 4,326 of them available.

Want to learn something new? Let your library help you learn from Lynda.com

I finally figured out how to customize the tabs on my business’s Facebook business page. This has been a time-consuming process because Facebook fails to behave the way that most of the tutorials say it should. I had a breakthrough today and this was the journey…
This Boostlikes page “How to Rename Your Tabs on Your Facebook Page” gave me my first clue in a very well-written post. They explained what I could and couldn’t do to customize the tabs. They introduced me to the concept of FB apps and explained that I could customize my tabs by using an app.
Then I watched a great video (I won’t mention all the non-great ones I watched) “How to Add Apps to Your Facebook Fan Page. This video introduced me to Woobox and showed me how to install this app on FB.
Once that was done, it was smooth-sailing. I was able to add the What We Do and Portfolio tabs and get the non-editable tabs out of the way (hidden in the More tab). There is still much for me to work on, but it has been a productive day.

I’m always looking for ways to reduce household expenses and eliminate unnecessary chemicals from my life. For the past several months, I’ve been making my own dryer sheets. Goodbye Bounce fabric sheets! These homemade sheets are so easy to make and totally sustainable—use them over and over again.

The vinegar will freshen the laundry, combat static cling (but not entirely win), and soften the cloth. The essential oils will make everything smell good and some oils will kill any bacteria and germs found in the laundry. The clothes stay surprisingly moist in the sealed container. I stack the used clothes on a shelf above the washing machine and repeat the process when the ones in the container are all used.

I’ve tried every gizmo on the market to get corn off the cob prior to freezing. Most leave great chunks of my knuckle mixed in with the corn.

Here is an absolutely slick way to tackle this labor-intensive job. You will need two tools: a bundt cake pan and an electric knife.

Last fall, I shucked, de-kerneled, and bagged 7 dozen ears of corn in less than 2 hours!

OMG, these pickles are deleeeshious! And so easy. It will take you 10 minutes. Contrary to popular opinion, these pickles can be made using regular cucumbers rather than having to buy pickling cuckes. Yes, the skins are thicker, but they taste just great. I love this recipe because it makes 1 quart and 1 pint at a time. So when I have four cucumbers from the garden, I just cut and squeeze them into a jar, pour over the brining liquid, shake the jar a couple times a day, and 10 days layer I have exquisite dill pickles. Give them a try. This is a particularly good recipe to introduce you to fermented foods. You’ll get hooked, I promise.

1. Wash the cucumbers, but don’t scrub them (you want to leave some lactobacillus bacteria on them) and rub off any spines.

2. Trim about 1/8 inch off the blossom end of the cucumbers. This removes an enzyme that can make your pickles limp. I also cut the cucumbers into halves or quarters so they fit together better in the jar.

3. Put the other Main Ingredients in a 1 quart largemouth canning jar and then pack cucumbers in as tightly as possible (try not to bruise them in the process).

4. Mix the brine ingredients together in a bowl and then pour the mixture into the jar to cover the cucumbers completely, leaving about 1/2 inch headspace.

5. Cover with a canning jar lid and band, write the date or day on the jar (a Sharpie works), place the jar in a bowl (to catch any overflow or leakage on the days the jar is inverted) and once a day, for a week, flip the jar over to redistribute the spices that will tend to settle to the bottom.

6. After a week, keep the jar in the refrigerated. Enjoy!

The original recipe said these would keep for a month in the refrigerator, but I have some that are several months old and they are just as crispy and delicious as they started out. Remember that with fermented vegetables, if they look or smell bad or appear slimy, don’t eat them!

(Photo and recipe from http://www.motherearthnews.com/real-food/pickling/quick-and-easy-fermented-dill-pickles-zbcz1508.aspx. They adapted the recipe from A Platter of Figs, David Tannis) 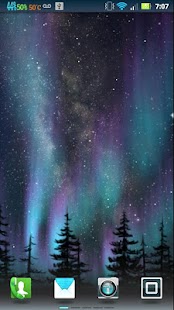 I enjoy looking at my tablets and phone even when I’m not using them. The reason is they use a live wallpaper that constantly changes. My very favorite live wallpaper is Northern Lights.

I’m a northern lights fan and this wallpaper is stunning and also soothing with its gentle transitions of the aurora, twinkling stars, and an occasional shooting star.

I really liked these, too: 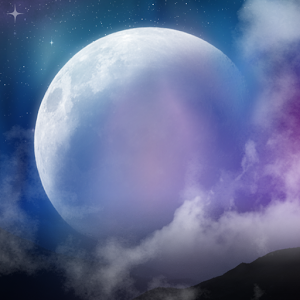 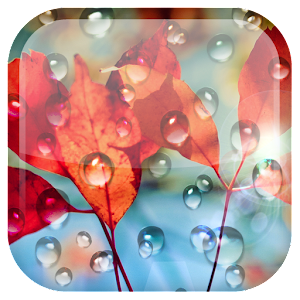 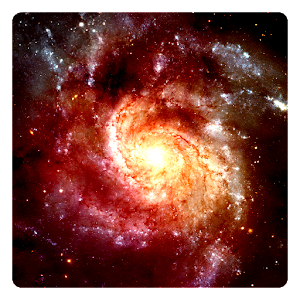 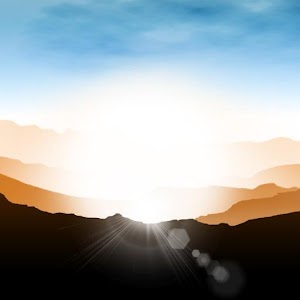 When Google shut down its iGoogle RSS reader in 2014, I searched for replacement options. After trying several, I settled on Netvibes.com and have been very happy with it. It can pull feeds from any available blogs or Web sites, but the big selling points are the available widgets and the extensive customization I can do. Widgets, like weather, news, and (most importantly) photos of cats, turn this dashboard into a visually pleasing landing page. Plus I can make as many separate pages as necessary on my dashboard (e.g., one for finances or games). Here is a screen capture of my Netvibes dashboard (click to enlarge):

My springtime “I-need-to-plant-something-green” eyes are inevitably bigger than my August “what-the-heck-was-I-thinking-when-I-planted-all-those-freakin’-tomatoes” tummy. Because I preserve a great deal of the meat and vegetables that I grow, I dutifully can all those tomatoes despite the growing number of unused and unneeded jars of canned tomatoes building on my pantry shelves.

This summer was no different except that I planted double the number of tomatoes than usual, thinking that I needed to provide my parents with tomatoes since they no longer grow their own. Well, they moved into a retirement home that provides all meals. To make matters worse, I learned in July that I needed to forgo my usual high-acid diet to help an acid reflux problem. So no more tomato dishes for me.

The tomatoes plants, however, outdid themselves.

My practice is to wash the freshly picked tomatoes and immediately freeze them in gallon zip-lock bags. Then when the weather cools off and I don’t mind heating up the kitchen with pots of boiling liquid, I preserve the harvest for long-term storage. This post describes two ways that I let my crock-pot do the heavy work for me.

That’s it. You’ll need to shake the juice to mix the pulp and liquid; it naturally separates. Store in the fridge for 10 to 14 days. Makes 1/2 gallon of juice.

The most time-consuming task in making tomato sauce is cooking it down to remove the liquid and thicken the sauce. The crock-pot will do that for you.

The pulp in the bowl is the perfect consistency to make tomato sauce, pizza sauce, and spaghetti sauce. We’ll add some basic spices to make a general-purpose tomato sauce. When you open the canned sauce, you can add meat or more spices to suit whatever you are making.